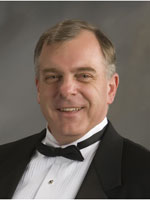 Szalaj was a select member of the Festival Chorus of the Robert Shaw Choral Institute at Carnegie Hall in January 1995.  He has been an active member of the American Choral Directors Association (ACDA) and The Music Educator’s National Conference, and is currently serving as the Community Choir Repertoire and Standards Chair for the Illinois-ACDA and on ACDA’s national choral review board.

Szalaj was recently awarded The Dr. Marie Ann Vos Music Leadership Award by the Board of Trustees of The McHenry County Music Center, for his long time commitment to choral music in the community. He is the founding Artistic Director of Voices in Harmony, which began in 1987 as the Crystal Lake Community Choir.